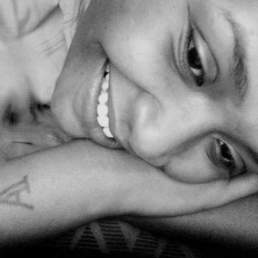 NginaFayola is a singer/songwriter, born in Guyana,South America. NginaFayola and her family migrated to Cleveland, Ohio

Yoruba Singers; he became her direct influence into her craft.She started as a poet in Cleveland, Ohio then ventured into

singing songs with her guitar at local open mic nights.

Anomaly, and Ladybugs In My Lamp. Each composition was arranged and created by NginaFayola; each album reflects a

point of change and growth within Fayola’s personal.Fayola also produced ASpoken Word Project: For The People, for

Kisha Nicole Foster (Gneous Music) in 2008. In 2008, she performed at the Kings vs Queens on the Iron Mic show(Grog

Shop) and she competed in the Battle of the Beats (Symposium).

In 2009, she was featured in the Cleveland Scene

magazine for her performance in the Queens of the Iron Mic Show. She has worked with such artists as Eriq Troi,

PhatBurner, Elemental Hard Groove, and Joe Byrd. She has toured with RepLife, a jazz/spoken word duo, which consists of

Mark Matthews (D.J) and Daniel Gray-Kontar, in Ohio and Pittsburgh.She has also featured at The Earth Nightclub

Fayola performs live acoustically or with a four-man band and back-up singers.Simplicity describes the NginaFayola experience. Fluid emotions are secure inside music. NginaFayola’s voice, being of survival and awareness, is one that is hypnotizing. The sound holds the listeners ear, and commands the soul to calm down,

a reassurance that things will be just fine. This definitive style is one that is imperative within the movement of music

progressing people and is what sets Fayola apart from her peers. In her songs she questions, initiates and shares in

detailed sequences; each one balanced with genuine concern for the aesthetic of music. Her music is an art and she

composes songs for the sake of this art; in hopes that it reaches internationally...that her birthplace of Georgetown will

serenade her home with her lyrics.

NginaFayola is a flame that others flock towards, drawn to raspy undertones within a

electrifies one individual at a time, leaving each with simply dope music –smiling from ear to ear.

"Last night. Grog Shop. True soul artist. I've never seen or been a crowd that was truly under

an artists spell. She was magnificent. And we all could have stood and listened to Ngina Fayola

and her band play 3 more sets.

If you're claiming to be about music/art and you don't know bout her...you need to get hip or

"““Coming from a musically-diverse family, Ngina Fayola has developed into an

“Music that conveys DEEP emotion--straight from the human heart. Ngina has a gift of

nuanced expression from both her voice and guitar that mesh together to make you FEEL.

“Perhaps the most impressive is the Guyana-born Nginafayola, she's got a unique style and

Recommend this page on: